My trio attended another con this weekend.  I am lucky to have the girls, who drag me out of the house and away from normal for a few long hours, some days days in a row. I really enjoy all of the cosplay, seeing the stars and the amazing vendor art. In general panels are a gift, both an insight into the person behind a character (or in many cases a set of them) and a grateful reprise for my feet.  The Dallas event always has so much more to offer in Star Power, and since it is closer to other states it often has a much larger draw than our Austin Conventions.  We get tempted with the promise of so many awesome things that we inevitably make the 3 hour trip up, seeing the sun rise and set from the seat of a car.

The cosplay at these larger events is never disappointing, the quality levels so beyond my own skill set. This Overwatch set is part of the group FrostbiteCosplay. I am proud to say that the big guy and his mate won best in show. I have to admit, it was hard to not follow them around like puppy dogs. 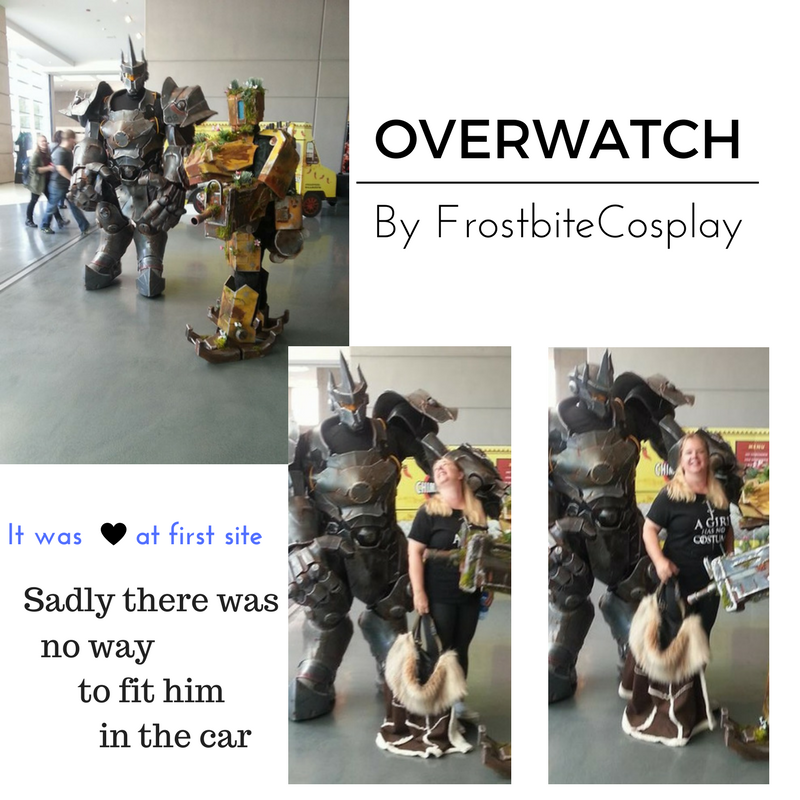 There was a lot of great cosplay, but with the truly overbooked crowd it was so hard to get any good pictures. Our normal tours of Artists alley were discarded by panic inducing crowds and a real lack of being able to see through the masses to the vendors. Most of the day was wasted by long waits in lines, to see panels or pre-booked photo shoots that ran hours behind. The crowd was so stifling it was impossible to make ourselves stay in place at times, there are only so many times you can be shoved aside before it gets really old.

We have been to two separate Fan Expo Events in Dallas. The layout at the Kay Bailey Hutchinson Center in Downtown Dallas was a much better setup than the prior one at the Irving Convention center.  Both, sadly, had similar issues. They over sell tickets, creating stifling crowds. They over sell photo ops, creating unbearable waits. They over sell autographs, lines clogging walking areas. And most importantly to me, they dismiss complaints both in person and in writing.

Last year in Irving we were in line in a hot parking garage in a never ending line for an hour, just trying to get in the door. Later we were stuck on various floors, unable to ever get to the third floor for a single panel (they would halt all upward progress when they deemed it overflowing), STUCK on the first floor for a long time, only to flee to the second floor for hours after fighting to get up there. The pricey photo ops we had pre-paid were up there and we were afraid to miss them. Any star autograph areas were segregated and off limits unless you had a pass. At this location the artist alley was more accessible but they failed to inform us if we went outside (from any floor) we had to get back in line at the front door for re-entry, which also took a crazy amount of time.  Our large group was often separated and had great difficulty being able to rejoin each other. The event was clearly oversold, and we promised ourselves on the 3 hour drive home not to go back to that venue again.

This spring we could not prevent the temptation of the all-star line-up that was promised. Since this was at a much larger, different venue we agreed to give it another shot. We pre-purchased tickets since some of the Saturday passes were selling out. This gave me hope that they had finally understood the complaints of over-crowding. A good number of the “all-star” attractions that had tempted us in the first place ended up either cancelling out right or coming in late and leaving early. This was handled poorly by the staff. Now, first off, I know that many of the staff are actually volunteers. Once you have been to a few events (and worked some) you can tell the various levels. There is a lack of training, a lack of communication and a lack of simple things like MORE white board signs for line holders. They didn’t even figure out to use the buildings intercom system until the brutal end of a very long day.

I could go on, but really, who wants that? For more pictures check out the Instagram account on the right side of the page. And if you want my opinion, Wizard World hosts events that are simply amazing and I will not be going back to another FanExpo/FanDays in Dallas again.

This site uses Akismet to reduce spam. Learn how your comment data is processed.